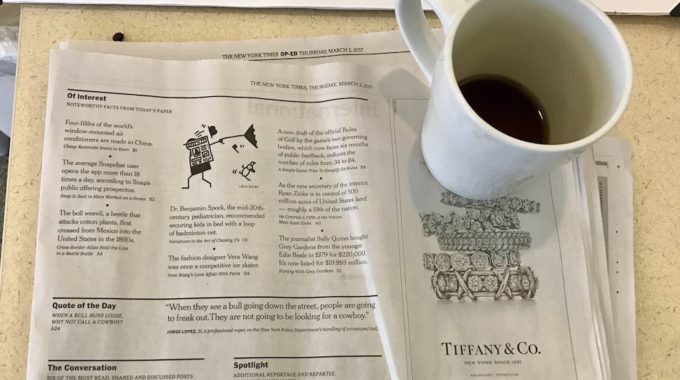 The New York Times has redesigned the opening spread of the print edition to make it more of a digest of everything the outlet is doing across all media. So, yes, that include capturing the best of its journalists’ tweetstorms on there. Laura Hazard Owen interviewed Jake Siverstein who led the design work:

But we also recognized that there were some important functions this page could play — not only warming people up but offering a dashboard of the huge scope of activity that’s going on in the world of The New York Times on any given day. That scope has expanded in recent years to take in not only what’s happening in the print paper and videos and podcasts and various institutional social media accounts, but also our live journalism, and all of our journalists’ own social media accounts.

This is a tentative step in the direction pint newspapers will need to move if they are to survive, in the era of 24/7 online news. Once you acknowledge that the print edition is no longer the “breaking news” vehicle, but, essentially, a daily summary of what you need to know, then you can design outwards from that idea.

Why newspapers should take design cues from magazines

Interestingly, Silverstein comes from the New York Times Magazine (he’s editor-in-chief) – and this is much more magazine thinking than newspaper thinking. Silverstein again:

Part of the goal was to create something that was entirely visible in one open spread of the newspaper, that used some of the rhythm and pacing and design of a magazine front-of-book — the difference being that the whole front-of-book is laid out before you turn any pages, so your eyes can wander around small content and small features, latch on to one thing and then drift over to the next thing. There’s something leisurely and pleasurable about that. It’s kind of an appetizer course before you get to the rest of the paper.

And that’s what print newspapers are becoming: daily magazines.

Fonte: One man and his blog