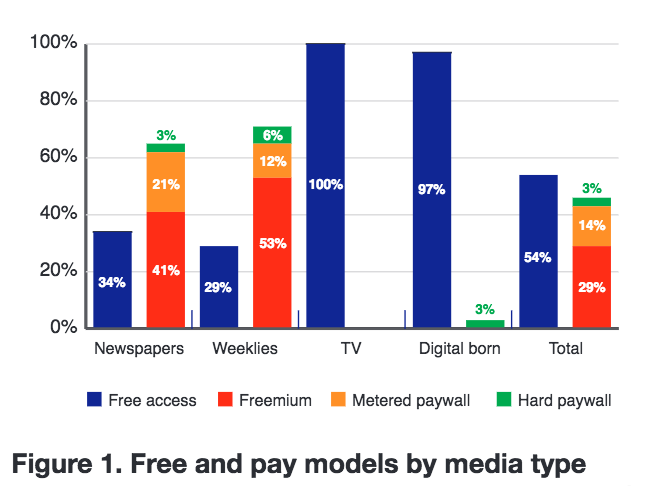 “A lot of people in the market are talking about paywalls or free traffic very much from an angle from what is right and what is wrong. Sometimes people think there is only one strategy: theirs,” Christian Röpke, the CEO of German newsweekly Die Zeit’s online presence Zeit Online, recently toldmy colleague Joseph Lichterman. As Zeit Online tries to attract a younger audience that might ultimately pay for its product, it’s trying a number of different strategies, from live events to new types of editorial content.

Die Zeit just launched a new metered paywall in March, and it certainly isn’t alone: Though their strategies vary, European publishers are moving away from offering all of their content online for free, according to a factsheet released Wednesday by the Reuters Institute for the Study of Journalism. The factsheet looks at the different kinds of paid content (freemium, metered paywalls, hard paywalls) across 171 different news organizations in the U.K., France, Germany, Italy, Finland, and Poland.

— Across the countries, 66 percent of the newspapers and 71 percent of weekly newspapers and news magazines had some kind of pay model. Freemium models were most common, followed by metered paywalls. Of digital-native sites, 97 percent offered their content for free; the only one in Reuters’ study that didn’t was France’s MediaPart (there’s also De Correspondent in The Netherlands, El Diario in Spain, and Zetland in Denmark, but this report didn’t look at those countries).

— For news organizations that did have a pay model, the average monthly subscription price was €13.64 (USD $15.19). But there are a lot of regional differences; the U.K., though it “has the lowest percentage of newspapers and weeklies with pay models,” had the highest average monthly subscription prices (in part because high-priced business newspapers like the Financial Times were included in Reuters’ sample).

— Not surprisingly, a lack of competition (either in terms of geography or language) makes it more likely that a newspaper will charge for content:

A much larger share of newspapers and news weeklies in Finland (87%), France (95%), and Poland (90%) have adopted pay models. These are markets that are either dominated by a limited number of very strong incumbents (like Finland) or markets where the digital display advertising market is very small (like Poland).

In Germany, a more competitive market, “almost half (48%) of newspapers and weeklies in our sample offer free access to news.” A 2016 Reuters report found that only 6 percent of Germans had paid anything for online news in the past year, compared to 20 percent of Poles and 15 percent of Finns.

The factsheet is here.